Sonic For Hire Wiki
Register
Don't have an account?
Sign In
Advertisement
in: Season 1, Season 2, Season 3,
and 15 more

Earthworm Jim is a major character who appears in the Sonic For Hire series. He is one of the four main characters of the series and is a very close friend of Dr. Eggman.

He is voiced by Alex Bernstein. His voice is similar to that of actor, Jason Lee.

He first appeared in "Earthworm Jim", where he hired Sonic to keep his suit away from Bob. However, Sonic killed Bob, took Jim's suit, and stole his TV as payment.

He then appears in "Tetris" with Eggman to get his suit back from Sonic but Sonic claims that he was meaning to give it back but he wanted to wash it first. Earthworm Jim reminds Sonic that the suit is dry-clean only and that he'll ruin it. But Sonic tells him that he didn't wash it yet and that he let Soniqua use it as a diaper. He attempts to take it back by force but get's thrown away by Soniqua.

He appears again in "The Battle Part 02" to assist Sonic in his battle against Mario and several other villains. He used his raygun to kill Bowser but then spins his raygun and shoots himself by accident, covering his face in soot.

During Season 3, Earthworm Jim becomes a supporting character and helps Sonic and co. with the mob boss business, starting with trying to find Princess Peach, but he and Eggman end up bring Princess Potato.

In Casino Zone story arc, he's the groups' computer expert and eyes in the sky. Him, Sonic and the gang managed to pull of the hiest, but it turns out they stole rings, which are worthless in his world. After Sonic, Eggman and Tails fail to make up the Casino deal with him and Kirby, they take them to a football game and it turns out Sonic fixed the game so they could lose and get all the money. Through most of the episode, Jim passed out when he dranked a roofie cocktail Sonic made for the cheerleaders.

He then assists Sonic and co. against Darth Vader in The War story arc and later won.

In Contra, Tails takes over the Mob Family when Sonic's in the Hospital, and he sends him and Eggman to South America so they can find El Padrino so they can get in with his drug dealing buisness. When they get there they captured by El Padrino's henchmen and they try to explain to him why they're there only for them to entertain El Padrino. They then stay with El Padrino after they dance with millions of girls and take in a bunch of coke on their tits.

He was mentioned by Kirby in "Two Bad Characters."

In "El Padrino", Jim and Eggman were taken home by Sonic, but Eggman was too reluctant to do it, since he thought South America was paradise, so he was dragged away by Sonic and Jim.

He reappears in "The Red Carpet", attending the premiere of, Two Bad Characters with Eggman and Thunderhead.

In Season 5, it is revealed that he, along with Dr. Eggman, survived the theater explosion that Sonic cause so he could kill Tails. He forgives Sonic and continues to help him out on some of the missions the gang are assigned to do.

In "Star Wars", it is revealed that he can't survive deserts since he is a earthworm, and his species needs water to survive, and there was no water in Tatooine's desert.

Jim then proceeds to kill three bounty hunters that were sent by Mario to kill Sonic by zapping them with his ray gun in "The Avengers."

In "Things Get Messey" , he gets turned into a Yoshi after him, Tails and Eggman attempt to bring Sonic back to life after he was killed by Mario in "Return of the Plumber".

After the events of "Reset", Earthworm Jim reappears in Season 7, along with Sonic, Tails and Eggman to rebuilt the universe pixel by pixel, weird things started to happen, and the only way to stop this is to find the creator. They must solve riddles and get clues to find him.

He returned to his origin in "Back To Work", where he was confronted by his arch-nemesis; Psy-Crow.

Later on, in the season finale, "The Creator", where Eggman and Earthworm Jim have opened up a beachfront café in Dead or Alive, their biggest selling item being the "coke on tits breakfast bonanza".

In Hedgehog For Hire, after his and Eggman's illegal sex dumpster was closed down, he and Eggman reside in Sonic's apartment. Later on, accidently kills Morty from Morty Kombat, and takes his own body, as he starts programming and coding a new game, that is going to be a hit new game for Sonic and co.. Later on, he is taken away by Eggman and his daughter Eggette, and codes a dancing baby. He is then throwed out of the window, and falls on the ground out of Morty's body, then found by Sonic and co. who replaced him with a big pink penis, and joins them to defeat Eggman and Eggette. 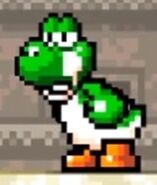 Jim as a Yoshi.
Community content is available under CC-BY-SA unless otherwise noted.
Advertisement