Sonic For Hire Wiki
Register
Don't have an account?
Sign In
Advertisement
in: Episodes, Season 2, Episodes Not Involving Tails

When asked to help out a special needs kid, Sonic realizes he is pitted in a death match against a mentally handicapped Outworld creature.

Sonic is in Mortal Kombat, facing off against Goro in the ring. Sonic believes there has been a misunderstanding, as he was told he was simply helping out a "special needs" kid. Sub-Zero enters and claims that Goro is actually mentally retarded. Sonic is okay with this information, hoping he can just take Goro to an aquarium or get him ice cream but is still baffled as to why he needs to battle him to the death. Sub-Zero tells him that it's what he does for fun instead of normal kid stuff. Sonic then sarcastically agrees to battle him, quipping that he wants Goro to have a big smile when he rips his arms off. Sub-Zero agrees and asks Sonic to scream too, as it makes Goro laugh. Sonic then questions Shang Tsung, on his throne, if watching 2 people beat each other to death is the only way he is entertained, and if he has collected enough souls already. He then advises him to read books, watch a poster, go on a tandem bike ride: to live life. the sorcerer shuns him and starts the fight. Goro immediately grabs Sonic and starts bashing his head in. Soniqua then arrives and saves her father by running the Shokan down with her wheels. Sonic half-heartedly apologizes to his daughter for trying to kill her and finally agrees to give her ice cream. Unfortunately, Soniqua no longer craves ice cream, but rather "man flesh" and starts tearing away at Goro's corpse. Sonic is disturbed enough to say only two words: "Holy. Shit." 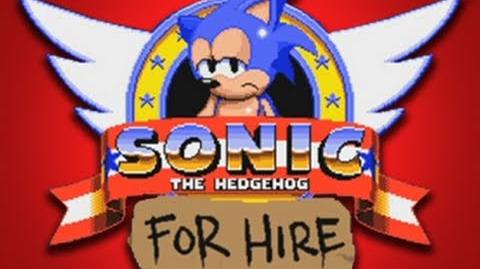